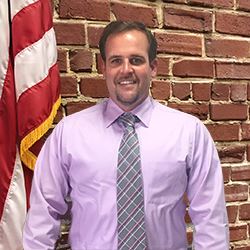 Mr. Jerry Pykiet is City Commissioner for Ward 4 of the City of Collinsville. He is the current owner of Blue Brook Consulting which he created in 2009. Jerry is very involved civically helping with such organizations as the Coffee Bunker in Tulsa and also the Junior Achievement of Oklahoma.

Jerry has lived in Collinsville with his wife and three children since 2015. In his spare time he enjoys going to the lake and spending time outdoors with his family.

Mr. Pykiet holds Bachelor degrees from OSU in Administration and Marketing with a focus in International Business, along with a Black Belt in Lean Six Sigma. He is adept at bringing organizations to a point of delivering increased profit margins while at the same time increasing revenue through superior performance. Jerry is a results oriented achiever who is passionate about helping communities, companies and individuals initiate action to achieve the goal.