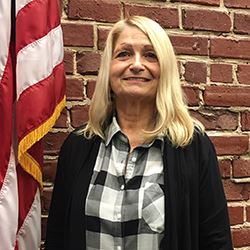 Ms. Melodie Bateman currently serves as Ward 2 Commissioner for the City of Collinsville. She has served in that capacity since 2014. Prior to this term, Melodie served as City Commissioner for Ward 3 from 2004 to 2010. Ms. Bateman’s desire to serve her community is based on the betterment of Collinsville, never losing sight of the hometown values the city possesses while also recognizing the equally important need to integrate technology into the continued growth.

In her spare time, Ms. Bateman volunteers at:

She also enjoys spending time with her children and grandchildren.

Ms. Bateman is very active in many civic and non-profit organizations. She: