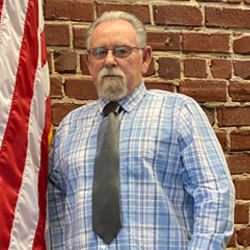 Mr. Danny Stanley currently serves as Ward 3 Commissioner for the City of Collinsville.  He was born here and is a lifelong resident of Collinsville, and proud citizen of the Cherokee Nation.

Mr. Stanley is ordained with and studied Theology at St. Luke’s Evangelical School of Biblical Studies in Dearing, GA.  He also studied Advanced Studies in Prophecy at the Institute of Biblical Studies, Lynchburg, VA.  Danny has also attended school for taxidermy, specializing in fish and deer.

Mr. Stanley served in the United States Army in the DMZ Zone, South Korea during the Vietnam Era.  He was presented with the Cherokee Warriors Award, February 2020, for his service.  He also received the Medal of Patriotism at that time.

Danny has worked as a rock mason, cross country driver, and retired from Customer Relations and Sales after 23 years.  He currently plays drums in the music ministry at his church.  Danny is also recognized as an accomplished Native American flute maker with his flutes being sold worldwide.  He is a proud father, grandfather and great grandfather.

Mr. Stanley has served as a pastor for 20 years, and serviced twice as Chairman for the Victory Cherokee Organization in Collinsville.